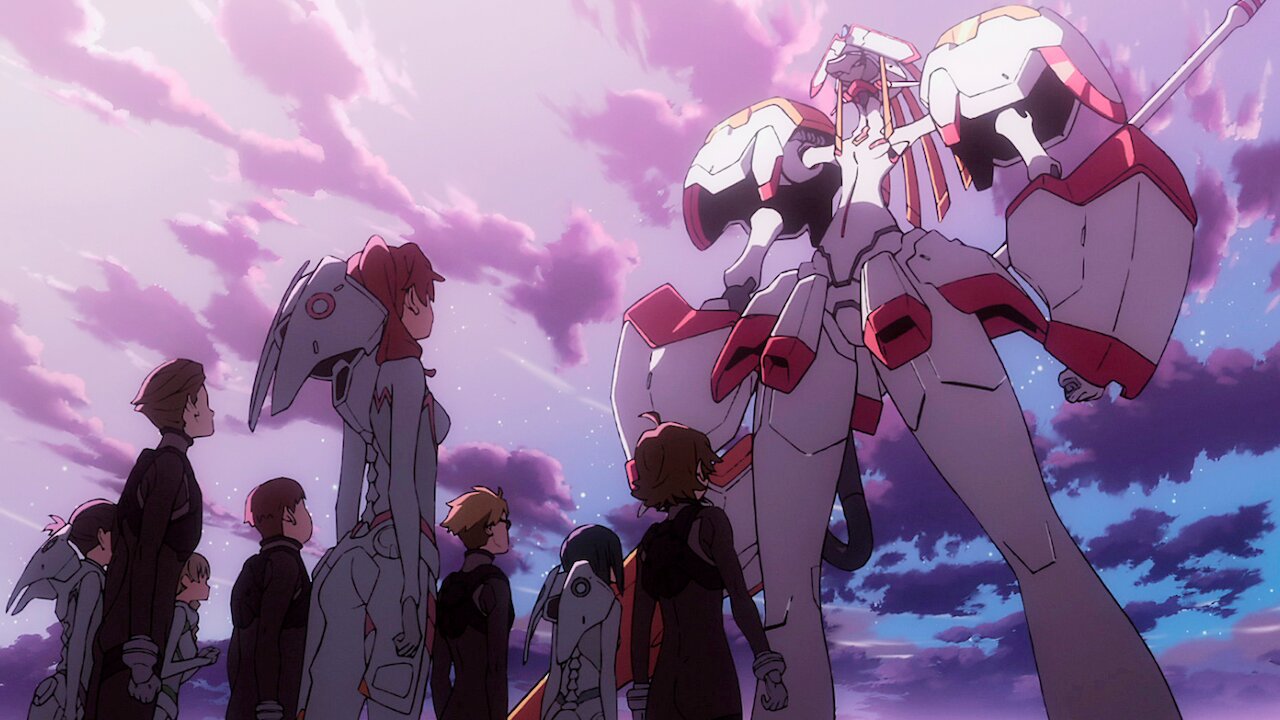 What is Darling in the Franxx?

Boy oh boy. I have a lot to say about Darling in the Franxx.

On the surface, Darling in the Franxx looks like just another generic ‘mecha’ anime – which wouldn’t be a bad thing necessarily since who doesn’t like mechs? – after all it’s got all the necessary ingredients: strangely sexualised mechs sporting boobs and miniskirts? Cute anime guys and girls in skin-tight suits to operate the mechs? Check and check.

However, though it might not seem like it, Darling in the Franxx is actually a very complex show; it’s got elements of sci-fi, mystery, dystopia, romance and good ol’ fashioned gundam action. It also manages to tell a story involving love and sexuality with a straight face, which is something very few anime can boast.

How could a show about giant robots have anything to do with sex, you ask?

Darling in the Franxx takes place in the far future. The world is a strange, strange place. Humanity has discovered the secret to immortality and ‘evolved’ past the need for relationships, preferring instead to spend their lives in solitude injecting serotonin directly into their brains. Children are not born but rather manufactured for the express purpose of operating gigantic mechs called Franxx and defending society from the Klaxosaur aliens roaming the Earth’s surface. Society is run by the enigmatic ‘Papa’ and the immortal ‘Adults’ who are worshipped as gods.

Franxx require two pilots to operate – one male and female – who ‘synchronise’ together. Good compatibility is required to operate the Franxx properly, which means once a good pairing has been found, that pairing are now ‘partners’ pretty much until one of them dies. This seems like it would be really romantic, right? ‘Till death do us part and all that… except for the fact that pilots are literally never taught what the concept of love or sex even mean, so they have no idea what it really means when you’re ‘compatible’ with another pilot. But we certainly do, as the audience.

See how I’m putting everything in ‘quotation marks’? That’s exactly the kind of dystopian world Darling in the Franxx takes place in. It’s a perverted world where normal things are twisted to mean something else entirely and nobody tells the real truth. There are no trees in the ‘Garden’, the ‘Lab’ isn’t a place of science and neither ‘Nana’ nor ‘Papa’ are here to take care of you. Quite the opposite in fact.

But, in the end, the depressing backdrop and cruel treatment of others makes the blossoming relationships in Squad 13 stand out that much more. Squad 13 seem vibrant, loving and full of life when compared to the drab, soulless world they live in. Seeing them experiencing normal human emotions and coming-of-age milestones – that we all take for granted – for the first time is twice as rewarding.

There’s a lot of innuendo here, but it’s handled artfully for a change

Darling in the Franxx has some pretty explicit sexual undertones running throughout it. Female pilots are called ‘pistils’ whereas male pilots are called ‘stamen’ – named after the reproductive organs of flowers. ‘Synchronising’ itself is pretty overtly sexual. I mean, just look at the position the pilots are in. The pilots describe the feeling of synchronising like ‘becoming one with the other’. There is no doubt in my mind that ‘synchronising’ is a metaphor for sex. And you’d think that this’d make the show awkward, but here’s the thing. It doesn’t.

Think about what this means for the Franxx pilots. The Adults know exactly what they’re doing when they pair the pistils and stamens up – they’re purposefully exploiting the sexuality of teenagers whilst systematically denying them the opportunity to explore it themselves. These young adults are being farmed – paired up like livestock and ‘mated’ with no agency or knowledge of what’s happening whatsoever.

It is clear that Squad 13 are aware that there is something which makes the unique relationship between pistil and stamen work, but they have no idea what it is, what it means or what to do with it. This makes it very interesting to watch it all play out as a normal functioning person who knows exactly what it all means, and really disturbing at the same time.

Of course, ignorance never lasts, and that’s the point the show is trying to make. Falling in love is something so inherent to the human experience that even if you go out of your way to dehumanise and isolate people, it won’t make a difference. Life finds a way and all that. The pilots may not call what they’re experiencing ‘love’ but we all know that’s what’s happening, and it’s cute as hell and very genuine in the way that puppy love always will be.

This all might seems too heavy for a show about giant mechs, but trust me, it works.

Storytelling bites off more than it can chew

Darling in the Franxx is a very complex show that gives the viewer plenty to think about, but sometimes it feels like there are too many competing demands on the show’s storytelling. As well as trying to follow each character’s development arc, there are multiple sub-plots to keep track of too: there’s the business with the Klaxosaur aliens threatening to destroy humanity, the unravelling of all the Adult’s lies, the issue of selective amnesia that the characters are suffering from, it’s hard to know which element of the story you should be focusing when there’s so much going on.

Naturally, with such a complicated story, some elements didn’t get the screentime they deserved. For example, how exactly did the Adults become immortal? Who donated the DNA from which the Children are cloned?

Unfortunately, I found that the arcs involving the Klaxosaurs (and other unnamed alien lifeforms) were entirely surplus to requirement. The story would have worked just as well had the enemies been other nations with their own Franxx – it wasn’t really necessary to bring aliens into it at all – and it would have made things a lot simpler. It also meant that the last four episodes were rushed as hell trying to tie eveything up.

Darling in the Franxx isn’t about sex – it’s a very hopefully show about our enduring need to love one another.

Darling in the Franxx, despite belonging to arguably the least original sub-genre of anime out there, manages to be one of the most original anime I’ve watched in 2021. It’s mature, thought-provoking and way darker than the bright, colourful animation style would have you believe.

Darling in the Franxx got generally favourable reviews but it’s critical reception was mired somewhat by people who felt that it was inappropriate to have 14-15 year olds being sexual with one another. I have a feeling that a lot of these complaints either came from American and Japanese viewers, both countries which either have very high age of consent laws (in America, it is 18 years old) or quite conservative attitudes towards relationships. Coming from a European country, it didn’t even occur to me to find teenagers falling in love inappropriate – isn’t it an entirely natural thing? It depends on your perspective. Regardless, if you are the kind of person who feels uncomfortable about sexuality, I would encourage you not to let that get in the way of letting you enjoy the rest of Darling in the Franxx story. There’s a lot more to it than just that – it’s equal parts dystopian mystery to rom-drama.