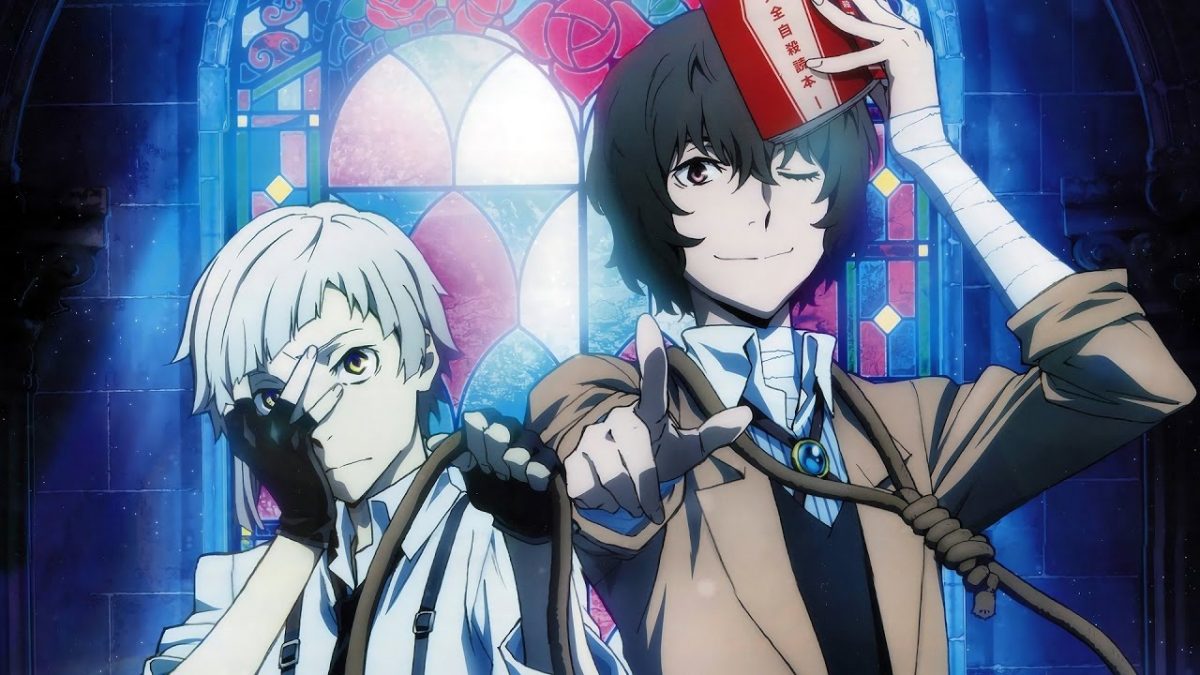 Here’s something I always wondered: why do so many anime insist on having names that have absolutely nothing to do with the actual anime. Like, you would have no idea what kind of show Bungo Stray Dogs was going solely on the name, would you?

Well, while Bungo Stray Dogs may have a strange name, you know what it doesn’t have? Stray dogs. Literally none at all. Not a single dog. Plus, ‘bungo’ means ‘literary’ in Japanese, so technically the name is Literary Stray Dogs. But dogs can’t read? And the show isn’t even about books? Nani?

(Alright, technically that’s a lie because all the characters are named after famous Japanese authors, but you get my point.)

What is Bungo Stray Dogs?

Bungo Stray Dogs is a crime drama with a supernatural twist (because this is anime, and everything has to have a supernatural twist). It follows Atsushi Nakajima who gets recruited into the specialist Armed Detective Agency by the eccentric and enigmatic Osamu Dazai. They specialise in difficult or mysterious cases – like X-files, but anime – in a city plagued by sinister organised crime syndicates. Oh, and everybody has superpowers. So there’s that.

Bungo Stray Dogs has a bit of something for everybody; the show is a blend of mystery, action and comedy. Being a detective show, there’s plenty of intrigue and misdirection. If you like watching misfit geniuses pit their super-brainy five-head strategies against each other a la Code Geass and Death Note, you won’t be disappointed. There’s also a lot of light-hearted, slice-of-life moments throughout the series, which stops it from becoming too heavy or brooding.

Bungo Stray Dogs has some truly wonderful characters with prominent, unique personalities. Combined with humorous writing and good quality voice acting (the dub is superior, IMO, no offense to the Japanese cast) and you have a show that’s simply bursting with flavour and style.

Some characters have become so popular that you could be forgiven for thinking that they were the main character instead of Atsushi – which sucks since Atsushi is a breath of fresh air as far as anime protagonists go. At this point, Osamu Dazai is the de-facto protagonist and poster boy (as well as the source of a sea of thirst tweets). Dazai does have a eccentric personality, but I still think he gets more simps than he deserves. I guess chicks really dig suicidal maniacs these days? There’s plenty of eye-candy to go around across the whole cast, if you’re into that sort of thing.

Bungo Stray Dogs already has an amazing art style but they really knocked it out of the park with the character design. The way Atsushi’s belt hangs like a tiger’s tail, Dazai’s bandaged arms, Chuuya’s hat, it seems like every small detail of these characters’ design has been carefully selected to express something about their personality. The costumes in general are reminiscent of early 20th century gangster films – with heavy trench coats, suits, hats, think Peaky Blinders but slightly less dated – that is to say every single character looks fly as hell and it’s one of my favourite parts of the whole show.

Doesn’t take itself too seriously

As a concept, Bungo Stray Dogs seems like it would be super serious show. The reality is somewhat different.

Whilst it does have its fair share of heavy moments, Bungo Stray Dogs doesn’t take itself too seriously. This is an incredibly binge-able show because of it.

Being a detective show, there are plenty of slower paced segments that give character’s an opportunity to set up their master plans, or explain their method once the plan has already been executed. In that way, the show reminds me a lot of Death Note, except it isn’t done quite as well here as it was there.

In Death Note, Light had the opportunity to walk the audience through his master plan, or at least explain it in detail whilst it was happening, through his inner monologue because he was the protagonist. In Bungo Stray Dogs, Dazai and Ogai, who do most of the plotting, aren’t main characters; we have to rely on them to actively explain their plans to another character on screen, which they rarely do. It was sometimes difficult trying to keep up with the mystery, and weakens the payoff – the ‘Aha!’ moment – once the master plan is revealed.

The problem with the supernatural

The supernatural spin doesn’t really add anything to the show apart from the opportunity to animate fancy set piece battles. You could argue that the abilities add extra layers to the characters, which I would agree with, but I get the feeling it was they were only included to widen the show’s appeal to young audiences that wouldn’t give a regular ‘ol detective show its fair dues.

The only problem with the abilities though is that supernatural abilities have no rules – the only limit is the imagination. This sounds like it should be liberating, but in reality, this lack of structure causes lazy writing. If the writers of Bungo Stray Dogs come across a problem, all they need to do is create a new supernatural ability to counter it, no explanation needed. They can just pull abilities out of thin air and change the rules on a whim, since the mechanics of how these abilities work is never explained in the show – and unfortunately, they did do this a few times.

Take Death Note in contrast. Death Note is also a supernatural crime show of sorts, but the reason that Death Note worked so well is because the rules surrounding how and when the Death Note could be used were set in stone and never once changed. There were rules that the writers had to follow, which forced them to get creative with how to progress the story within a rigid framework.

In all seriousness, Bungo Stray Dogs is one of the best anime I’ve ever seen

I had to think really hard to find things to criticise about Bungo Stray Dogs. The mysteries might not unravel quite so elegantly as in something like Code Geass or Death Note, but it does have a sizeable cast of characters that are simply a joy to watch, and an edgy film-noire aesthetic.

Atsushi also wins my ‘Most Relatable Protagonist of 2021’ award for his adorable, endearingly uncertain personality.

What’s next for Bungo Stray Dogs? There are currently three seasons, the last of which finished airing in 2019, and a film. Despite the popularity of the show, a fourth season has yet to be confirmed but there have been some rumours about a release at some point in 2022. My headcanon is that they’re waiting for more manga chapters to be released before jumping into the next arc – a similar situation is ongoing with Black Clover.

It seems hard to believe that a fourth season won’t happen, but I won’t be satisfied until I get a date that I can ‘bung-o’ straight into my dairy. Get it? I’ll leave an explanation here for anyone who’s not British.