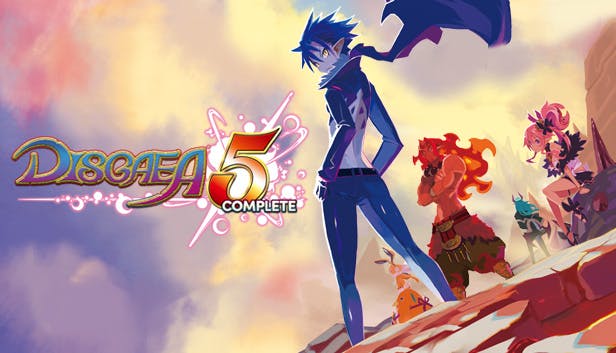 For many centuries, the world’s greatest philosophers and thinkers have pondered over why all the most ridiculous and over-the-top creations always seem come out of Japan. Whilst we are no closer to answering this most confounding of conundrums, in the meantime, Japanese videogame developers continue to anoint the world with some of the weirdest and wackiest videogames available on the market today – of which the Disgaea series, developed by Nippon Ichi Software, is a perfect example.

Disgaea is a series of tactical role-playing games which have become famous for their crazy characters, addictive gameplay and outrageous power-moves, but also infamous for being stupidly long, newbie-unfriendly and ridiculously complicated at end-game – most definitely a franchise with a strong character. Unsurprisingly, these games have a dedicated following.

At this point in time, Disgaea 5 is the most recent entry in the franchise released in 2015, however Disgaea 5 Complete (so called as it features all the DLC content) released in 2017 is the version I would recommend people to pick up and play.

Combat is easy to learn, but hard to master

Don’t be fooled – hiding beneath it’s eccentric exterior is a complex and multi-faceted combat system that statisticians can really sink their teeth into. Resistances, proximity to other units, terrain, environmental effects, passive abilities, combos, Revenge Mode – there are so many variables that you can play around with in an effort to squeeze every drop of damage from your units as possible.

But even if crunching numbers isn’t your thing, that’s fine too. Attacks, skills and spells are performed in such an exuberant, over-the-top way that watching it all play out is most of the fun. Combo attacks are laughably extravagant, skills even more so. Disgaea 5 doesn’t feel like a number games (even if it is) because it’s all wrapped up in a super sugoi package. Just like getting maths lessons from a super hot teacher makes you forget you’re in a maths class, there are far too many big-boobied anime chicks and surly anime guys for Disgaea 5 to feel like hard work.

As you play through Disgaea 5, even as a newbie, you’ll naturally develop an understanding of the game’s strategy. I found the game to have a very forgiving difficulty curve, with no real difficulty spikes in the first half of the game. As the game progresses, you acquire more units and additional mechanics are introduced, but by that time you’re already well versed in the fundamentals and totally hooked on Disgaea’s colourful chaotic energy – and that’s enough to get you most of the way there. Well… some of the way there. More on this later.

The characters are equal parts sweet, silly and sexy – the true Japanese way

Though most of your game-time is spent on the battle-field, a sizeable chunk will be spent interacting with your humble squad of loveable crazies – *ahem* I mean, characters. And characters they most certainly are. Though their personalities do conform with all the unusual stereotypes you would expect – the sultry protagonist, the beefcake, the temptress, the innocent school-girl, etc – this doesn’t make them any less entertaining.

Not to mention that Disgaea 5 Complete’s DLC allows you to access some iconic characters from previous Disgaea games – Laharl, Metallia, Salvador and Mao were permanent additions to my roster the moment I found out I could access them in-game, stats be damned.

The game doesn’t take itself seriously

Absolutely nothing about Disgaea 5 is weighty or meaningful. If you’re looking for a compelling story or an intricately crafted game Universe, you’re not going to find one here in the Netherworlds. Whether or not this matters to you depends entirely on whether or not you need a game to take itself seriously in order for you to take it seriously.

What some people might call nonsensical, aimless story-telling, others might call a quirky, kooky adventure with unpredictable twists and turns. It’s whatever spices your curry. But make no mistake, this is a very different beast to the more sincere and serious breed of tactical RPGs, like Fire Emblem.

As soon as you think you’ve settled into a comfortable rhythm, BAM, the game starts piling features onto you like it’s going out of style. The Item World, the Chara World, Innocents, Squads, Evilities, Magi-change, the Dark Assembly, quests, the Interrogation Room, the Curry shop, throwing mechanic after mechanic at you until you spontaneously combust with the stress of it all.

The first time I entered the item world, I didn’t even know what I was looking at. I mean, look at the above images – what the hell is all this nonsense? Please, God, make it stop! Stop hitting me with all this quality content!

The game only gives you a very vague explanation of it’s new features, preferring instead to chuck you in at the deep end and let you figure it out for yourself. It’s only thanks to the diligent folks at the Disgaea wiki and the internet forums that I emerged with my sanity (mostly) intact.

This sudden flourish of new features is no joke, and has scared away many an unsuspecting gamer. Don’t let that be you – the game is totally manageable but only if you know what to expect, so consider this a warning.

The end-game is just ridiculous

In most RPGs, getting to level 99 is something reserved for only the most dedicated of mega-nerds, or hackers. Disgaea 5 says “Screw that, we’re exactly 101 times more awesome than those games” and set their level cap to 9999. In what universe is level 9999 a realistic end-game level to expect players to achieve? In the Netherworlds, that’s where.

In fairness, you only need to level your characters up to the mid-200s (only) to stand a chance against the campaign’s final boss, but most Disgaea fans will agree that the post-game content is a key ingredient in Disgaea’s recipe that can’t be skipped if you want the true flavour.

This is a 200 hour RPG; I take my hat off to anyone with the willpower to make it that far. I advise completionists to either set aside their lofty ambitions and venture only as far as they can bear to go, or avoid the Disgaea franchise entirely.

Let’s get straight to the point. In order to enjoy this game, three things have to be true: one, that you must enjoy tongue-in-cheek, nonsensical narratives; two, that you must really like the combat – like, REALLY like the combat. Because that’s where the majority of Disgaea 5’s stand-out content lies; and three, you’ve got to be a total weeb, and proud of it too.

Part of Disgaea’s unique charm is that it is unapologetically Japanese – sweet, silly and sexy all in equal measure. The developers clearly had a lot of fun writing and designing this game, and that passion really rubs off in the end product. Playing Disgaea 5 is a light-hearted, joyful experience, even in spite of it’s complexity – it manages to be challenging, without necessarily feeling like a challenge. But perhaps that’s just because I’m a total sucker for a well-endowed anime waifu. Then again, aren’t we all?

4 thoughts on “Disgaea 5: Alliance of Vengeance – A challenging tactical RPG, but with added anime.”