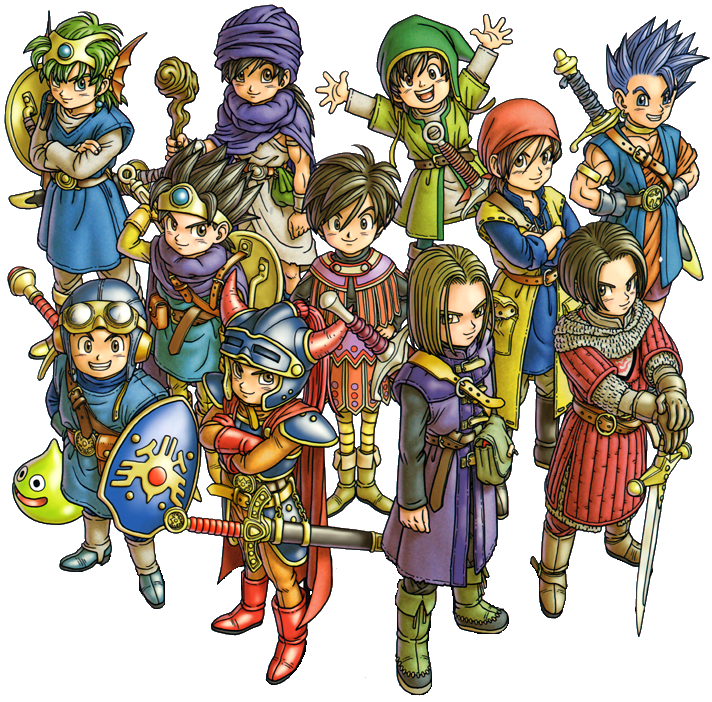 After 50 hours, me and my husband finally finished Dragon Quest XI: Echoes of an Elusive Age on the PlayStation 4. Having invested more than two full days worth of my time into the game, I fully intended to write a glowing review of my experience for this website. But, when it came to actually writing the review, after two hours of staring at a blank word document, waiting for my praise and admiration for the game to manifest itself as it usually does, I realised something.

I am absolutely incapable of saying anything about Dragon Quest XI that I couldn’t say about most other games in this franchise.

The Dragon Quest franchise is one of the oldest and most established turn-based JRPG franchises out there. Even 34 years down the line, the franchise’s “consistency” is really quite impressive.

The premise for all 11 Dragon Quest titles remains largely the same – embark on an epic journey to save the world, gaining skills, items and companions along the way. It’s as timeless as they come.

The artwork for the Dragon Quest series has been done by manga artist Akira Toriyama (think Dragon Ball Z) ever since the franchise’s conception in 1986, giving Dragon Quest games a very distinctive aesthetic. Granted, when comparing the pixelated graphics of the NES era to the beautiful cell-shaded graphics of Dragon Quest XI, the difference is night and day, but the character design, weapon design and concept art have barely changed at all; the same goes for monster design. Monster designs are recycled unapologetically, not only between different games, but also within the same game, changing in colour slightly to give the impression that they’re different. One monster, the slimedrops, appears in the Dragon Quest franchise so frequently that they have become the unofficial mascots.

The simple turn-based combat system leaves very little need for innovation (and very little room to do so) with players relying on largely the same class and weapon combinations as they did back in the NES era. Even the little musical jingles for when your characters level up or cast a spell are exactly the same as they were 34 years ago.

For some people, this resolute continuity and commitment to staying true to the “Dragon Quest” formula is what makes the franchise so charming. I am sure what the developers intended was that hearing the same jingles, enjoying the same classic artstyle and experiencing the same grand adventures would give their games a distinct and unmistakable character. Perhaps they were going for an “overarching narrative effect” where all their games melded into one long continuous experience spanning 34 years. Or perhaps they just wanted to increase the nostalgia effect, enticing older players to keep returning to the franchise over and over again.

The truth is the Dragon Quest is more than a franchise – it’s a style, or a formula if you will. If you happen to like the formula, then this is great news for you. There’s enough Dragon Quest out there to last a lifetime – 11 whole perfectly predictable and deeply dependable titles to indulge in at your leisure, all of which are fun and engaging in that distinctive Dragon Quest way.

Being predictable and formulaic isn’t a crime. It’s precisely because of this predictability that fans can enjoy each new Dragon Quest game with the comfort and certainty of someone who goes to their favourite fast food restaurant every Wednesday after work and orders the same thing every time – you know exactly how much it will cost you, and you know it’s going to be delicious.

Perhaps Dragon Quest falls under a very specific category of video games, one that we all indulge in but might never officially recognise – I would call them “comfort franchises.” These are the Call of Duty’s of the world, games that we can acknowledge are cookie-cutter, repetitive and predictable, but that we can’t stop sinking hours into regardless.

Knowing what to expect is comforting; it makes us feel secure. Wanting to feel safe and in control of our lives is the reason why some people watch the same films a thousand times, or sink a thousand hours into their favourite game, or replay the same albums or songs to exhaustion. The point of doing those things isn’t to try something new, or be stimulated by something that’s different and exciting, but rather to embark on an emotional journey knowing exactly how it will turn out in the end. This predictability is something that most of us crave in our real lives, but something which we can only achieve via the consumption of familiar media.

Calling something a “comfort franchise” is NOT a value judgement. Pokemon, Monster Hunter and the Sims are all arguably examples of “Comfort franchises” and they’re some of the highest grossing franchises in the world, and we all love them.  We eat comfort foods because they’re delicious and they make us happy; we play comfort franchises for much the same reason (except the delicious part, I wouldn’t recommend that you eat a game). Surely that’s the whole point of playing a videogame in the first place – to feel happy.

“Comfort franchises” are like food for the soul – they might not satisfy or entice videogame critics, in the same way that Gordon Ramsay probably wouldn’t write home about your mum’s homemade spaghetti and meatballs. But goddamn it, those meatballs are delicious. Ain’t nobody gonna tell me otherwise.

Do you have a franchise that you keep returning to? What are some of your favourite comfort franchises?